The 2017 College Football Playoff National Championship was a bowl game that was used to determine a national champion of college football in the NCAA Division I Football Bowl Subdivision for the 2016 season. The game was played at Raymond James Stadium in Tampa, Florida, on January 9, 2017. It was the culminating game of the 2016–17 bowl season.

The game was played between the winners of two pre-designated bowl games played on December 31, 2016: the Clemson Tigers, who defeated the Ohio State Buckeyes in the Fiesta Bowl, and the Alabama Crimson Tide, who defeated the Washington Huskies in the Peach Bowl. Having met in the previous year's championship game, the resulting title game between Clemson and Alabama became college football's first rematch between #1 and #2 in national championship game history.

The Tigers won the game 35–31 on a go-ahead touchdown with one second left, having come back from a 14–0 deficit earlier in the game. Clemson quarterback and Heisman Finalist Deshaun Watson set the record for most passing yards in a championship game with 420, breaking his own record of 405 yards set in the 2016 national championship game.Deshaun Watson and Ben Boulware were named the Offensive and Defensive Most Valuable Players respectively. 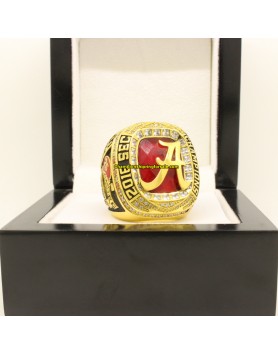